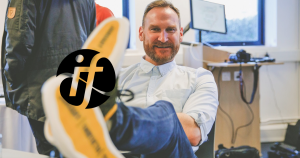 I had an unusual and unforgettable interview for a Sales Director position a few years back. It was for a pretty big and well known organisation…which is unlike me, I love the SME space, but I digress.

I meet with the Group Sales Director, Terry.
Terry starts the game, you know the one. The one where the alpha male metaphorically circles your chair, sizing you up.

Terry began to squeeze out of me the things he finds important, he cleverly pushes me for information about my possessions. Surreptitious questioning to find out the car I drive, the house I live in, my social life etc. I catch him check out my watch. Casio G Shock, Stealth Edition. Unimpressed.

I then hear all about his trinkets, his success, why he has been brought in.
“To take the company to the next level.”
Apparently, Terry’s kind of a big deal.

We then start the ‘dance’, “talk me through a balance sheet” he asks.
Great I thought, I’d just sat the finance exam for the Certificate of Direction with the IoD the week previous. Balance sheet, smashed it.

So then he asks me to draw the IT set-up of a typical organisation. Hmm. So I stumble through a topology diagram.
Servers, Switches, Routers, Flux Capacitor. I did OK… for a sales guy.

He then picks up his pen. No, no, don’t do it, I thought.
He did it. “Sell me this pen” he asks.
I showed respect and played along, after lot’s of weird objection handling, we ended the charade. Pen sold.

Then came the biggy, the one where I couldn’t take it any longer.

The end of the road.

“Ian, tell me about the last book you read”.

Boom! Terry goes into overdrive.
“You can’t progress your career without learning! You should really start to read books if you want to move up in life. Have you not read X have you not read Y? I’m looking for someone who is well read and is willing to learn outside of work and develop themselves. Maybe this role isn’t for you.”

I actually have books X & Y in my collection, although written in the 90’s, still a decent read.

“Terry, I consume so much content it’s unreal.
I watch YouTube videos whilst I get ready in the morning. Also, I listen to podcast’s on my commute. As well as engaging in Social Media before the ‘to-do-list’ starts, (whilst trying not to let it be a weapon of mass distraction).
I may watch a webinar during lunch and listen to a podcast on my return home. I will run whilst listening to interviews. After family time, I catch up on blog articles, influencers and social media.”

Bringing the right people into an organisation can benefit in so many areas it’s an article in itself. Ensure you have provision in place to let the right people through the net. Some interviewers, just sew up the holes.

….Oh and books…they’re for vacations.